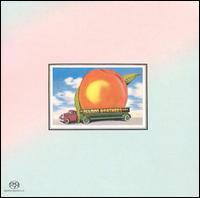 If anything is going to cement your star in the walk of fame of naff, it’s having one of your songs (‘Jessica’) used as the theme tune to ‘Top Gear’. The Allman Brothers Band, purveyors of blues-rinsed AOR, often hit the sweet spot on their lighter, country-tinged songs. ‘Blue Sky’ is a Sunday spin of Americana: a tuneful hook-filled verse and refrain frame a three-minute two-chord single-string guitar solo ““ not a million miles from, say, the extended riffing at the end of the Velvets’ ‘Oh Sweet Nuthin”. It could belong on the soundtrack to some cult 70’s road movie ““ Easy Rider or Vanishing Point, for example ““ just as easily as it could lie dormant as some filler on a four disc Drive Time anthology. TK