#117 Grandaddy – Everything Beautiful Is Far Away 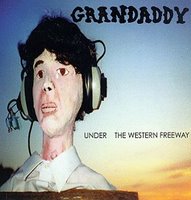 Ye grand auld tradition of not featuring the same artist twice on this site was ripped to shreds once the news that our heroes Grandaddy decided to throw in the towel. A crisis meeting in December seemed to uncover grievances that couldn’t sustain the Modesto band. One such was that despite supplying the world with endless heartfelt ditties their seemed to be precious little money floating in their direction. Perhaps it was the beards or maybe it was the fact that the band was more concerned with perfecting their art rather than courting the media. ‘Everything Beautiful Is Far Away’ is quintessential Grandaddy, hopelessly romantic with a ragged ability to hit a fluid euphony at will. Their disposition to ruffle a song with idiosyncrasies is also evident as the piece shudders to a chaotic halt. Beneath the chaos lies the perfect Valentines song ever recorded, a fact that was probably lost on most because it lacked a well-trodden sequence. At least we can look forward to the last hurrah when the bands parting shot ‘Just Like The Fambly Cat’ is released. With that Jason Lytle will embark on a solo career far away from home (Montana) so let’s hope his aim remains trained toward the sky. KD

Grandaddy – Everything Beautiful Is Far Away