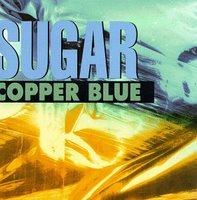 I somehow missed the Husker Du boat, only tuning in to the world of Bob Mould when his other band Sugar took off. I will be doing the Du before too long, however, as they’re down in the growing list of bands to discover. ‘Copper Blue’ was Sugar’s debut album and boasted some great moments such as ‘If I Can’t Change Your Mind’, which was played to death on MTV as a soundtrack to its ‘Real World’ show. ‘A Good Idea’ is another highlight and it remains the most note perfect homage to the Pixies in existence. Listening to it you can’t help romanticising on its alter ego ‘Debaser’. Witness the huge bassline that must have required a 10-foot high instrument and the grand wipe out that sees the tune shuttling wildly in disparate directions while still retaining a graceful finesse. Mould spews the inane words with the vibrancy of Mr. Black and all that’s left is for you to pogo on the spot. This is unadulterated indiepop heaven, without the saccharine, that has lost none of its potency more than a decade after its release. KD