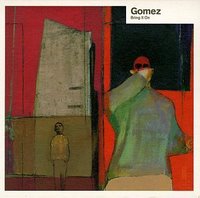 The fact that Gomez swept to victory in the Mercury Music Prize in 1998 with ‘Bring It On’ doesn’t seem to have elevated their standing greatly. This is probably down to the band rather than the award as their career to date has been altogether patchy. Despite the odd interesting tune none of their albums has matched the grand horizons set out on their debut. ‘Bring It On’ was a triumph that married several genres into a heady mix that while initially challenging revealed itself to be as inventive as Q during a particularly lucid moment. You’re not likely to find many albums that combine blues; country with throwaway student anthems but the band drew magic from the disparate inspirations. ’78 Stone Wobble’ displays energy, vitality and a downright alternate take on the factors that make a great single. Ben Ottewell is for once held in check down a phone line while the music displays a scattershot elegance through a myriad of fleeting riffs, hushed percussion, vinyl crackles and reptilian moves. KD