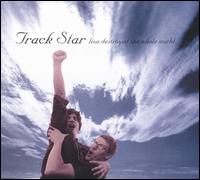 Track Star, in an unusual move, had the CD and vinyl versions of their ‘Lion Destroyed The Whole World’ album released on different labels (Better Looking Records, Turn Records respectively). Better to have your feet in 2 camps I guess, twice the exposure, yeah now I see where they were coming from. Aside from these ingenious marketing manoeuvres Track Star would still be found out unless their music was up to scratch. With a 5-year gap between their debut and sophomore efforts perhaps things were looking a little shaky but ‘Lion Destroyed The Whole World’ was a glorious affirmation of the San Francisco band’s craft. Things get off to the best possible start with ‘Feet First’, a cute shimmering ditty that harks back to early Belle & Sebastian or prime Apples in Stereo. Matthew Troy’s guitars endlessly jangle while the fey vocals amble selflessly between verse and effervescent chorus. A bundle of joy then, thankfully without the hourly messy nappy change. KD