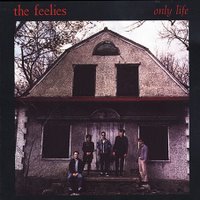 Formed in 1977 as punk was taking over the Feelies never really took to life in the spotlight. Despite gigging at the infamous New York joint CBGB’s and getting a cameo role in the hit film ‘Something Wild’ it appears that the bands lack of work ethic was their undoing. Word of mouth however meant that their influence was felt as far away as Georgia as Peter Buck of R.E.M. went to produce their lp ‘The Good Earth’. ‘Higher Ground’ is taken from the bands penultimate album ‘Only Life’ and is a prime example of a low-slung guitar classic. Glenn Mercer sings in such a laidback fashion it sounds as if he could nod off at any couplet, hard to blame him though when you’ve got such beautifully mild tempered playing behind you. As the song heads for the sunset the repetitive theme becomes as hypnotic as a tape looping on sounds recorded in the arctic. Oh, if the O.C. had been around in the late eighties. KD