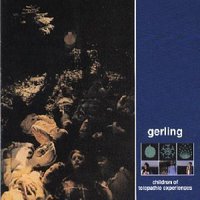 Before you think Architecture In Helsinki have it all their own way in the quirky pop department down southern hemisphere way you should consider Sydneysiders Gerling. On the go since the mid nineties and largely unknown outside their own neighbourhood Gerling have released 3 precious albums of electro pop wizardry. Their debut ‘Children Of Telepathic Experiences’ was a sprawling affair, with so many bleeps, whistles and samples being thrown in it took a while to spot what the band were trying to say. Lying on the edge of the storm, however, were 2 amenable ear toys. ‘Enter, Space Capsule’ should have become everybody’s favourite song to dance to, with its gracious beats and the best alien sounding vocal since ‘Spaceman’. ‘Ghost Patrol’ was closer to the indiepop template being awash with jangling guitars and appropriate hollers. The recording is loose and free spirited, just listen for the yelps of joy from the threesome about midway through. As the song progresses you get the impression that it is all going to fall apart at the seams but the off-kilter playing eventually makes its way to the finishing line. KD