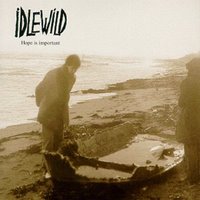 It saddens that Idlewild now occupy the remote part of the fringes. For a time they seemed to be on the cusp of delivering a truly remarkable album. Two recent stinkers have put paid to that, short-term gain resulted in them briefly holding the world in their arms but it also robbed the band of what set them apart in the first place. Roddy Woomble didn’t always have a note perfect Michael Stipe impression, in fact he could often struggle to be heard above his band mates ramshackle instrumentation. The blaze-trailing early days pitched the band with a throwaway attitude splashing through the ideas with fevered enthusiasm. While ‘100 Broken Windows’ marked their pinnacle both ‘Captain’ and ‘Hope Is Important’ presented plenty of enjoyable high jinxes. ‘When I Argue I See Shapes’ is a fluid example of a slightly unhinged Woomble pontificating as his band probe the simple riffs they uncover. Let’s hope they are all locked in a small room and made absorb this uncomplicated, straight down the line indie box of tricks. Perhaps then, they can put the bland bombast of recent albums to rest. KD

Idlewild – When I Argue I See Shapes