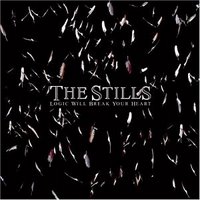 Before the storm there was the calm when a new breed of Canadians began to signal that something might be afoot in their country’s musical waters. While the Stills have not had the impact that their debut ‘Logic Will Break Your Heart’ deserved their time will surely come if the follow up ‘Without Feathers’ builds on the promise. The Stills may initially sound like another Joy Division/Interpol hybrid but their songs have enough flair to stand up to closer scrutiny. Take a peek at ‘Yesterday Never Tomorrows’ for instance with its showy beginning reminiscent of a locomotive gathering speed (listen to that bell) and an electro moment of the ‘Hyper Ballad’ kind. Surfing on a neat piano riff, twinkling guitars and Tim Fletchers amiable singing the band let the cat out of a bag with a chorus of oohs a la ELO. If that’s not variety for you, then perhaps you’d be better served concentrating on the stereo, drying wall and TV at the same time. KD