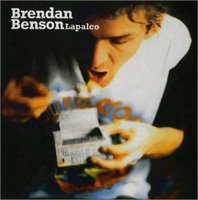 Brendan Benson’s star has risen of late, primarily due to the success of this third album ‘The Alternative To Love’ which was championed by Jack White. Personally I prefer its predecessor ‘Lapalco’. Co-written by Jellyfish man Jason Faulkner how could ‘Lapalco’ have been anything other than a joyful romp? The lead song was undoubtedly ‘Tiny Spark’ which exposed a precious wealth of tuneful audio. From the get go the fulsome Numanesque organ signals something great is about to happen. As Benson harmonises with several versions of himself, guitars fuzz by amiably and a piano is tinkled in the background. This is power pop at it most charming, sounding like all your favourite songs put together in a blender with a secret ingredient duly thrown in. If the Beatles had written this it would be a staple at any family occasion you care to mention. KD