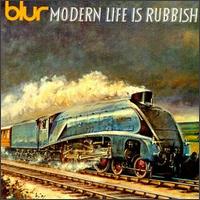 It seems almost idiotic looking back now but Oasis did triumph to victory in the phoney war with Blur. While Oasis have long since decomposed into an MOR nightmare, the various Blur constituents continue to colour the musical landscape. Damon Albarn has had huge success with Gorillaz while Graham Coxon is just about to release another batch of low strung gems. While it seems unlikely that the two will ever record together again under the Blur moniker they have left a wealth of intriguing material behind. The Blur ship may have ridden on various bandwagons but they always brought something enticing to the table. Their biggest seller ‘Parklife’ is often cited as the one that encapsulates their sound but its predecessor ‘Modern Life Is Rubbish’ actually stakes a better claim through the sheer consistency in the quality of the material. Here is an album that works best when listened to as a whole. With ‘Parklife’ it’s easier to pick and chose your own highlights rather than having to wade through a mass of songs (‘Badhead’ and ‘The End’ are truly inspired). The one track that does leap out from MLIR is ‘Chemical World’ with its sweetly distorted guitars and sing-along chorus. Albarn concerns himself with the vagrants and dissatisfied in society while the band cushion the depressing scene with a vivid backdrop. ‘Chemical World’ was only included on the album at the record company behest because they couldn’t spot an obvious single. This is the album version that includes a naff 2 minutes at the end called, rather prophetically, ‘Intermission’. KD