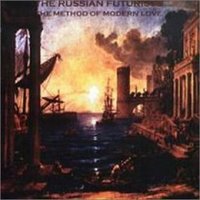 Matthew Adam Hart was the sole creative behind the Russian Futurists debut album. Hard to believe really because it possesses a grandness that normally only comes from collaborative sources. ‘A Minds Dying Verse (You And The Wine)’ closed the affair with a Cocteau Twins assured sense of aloofness. There are also nods to the Aphex Twin and Orchestral Manoeuvres In The Dark (nice). This is music from the digital age; the synth’s are laid on pretty heavy but retain a distinctly human texture. Hart for his part jumps straight into the melee, for all intensive purposes he could just be a clever robot programmed to craft the sweetest of ditties for humans. His voice is chiselled so finely it must have taken precision lasers to square it with the rest of the piece. The whole thing might appear daft to some, but be warned behind the electronics brews a storming talent. KD

The Russian Futurists – Mind’s Dying Verse (You & The Wine)

[US] The Method of Modern Love