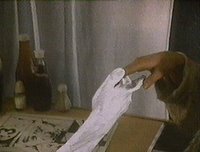 Ok, it’s Sunday morning and I have a headache, the birds are tweeting too loudly in the trees and I have to play football in an hour. Coffee, cigarettes (I don’t smoke) or Panadol won’t be enough to shake this leaden feeling. Perhaps some audio intervention is required, something that is always sitting there on the edge of my consciousness. Something that went through a period of getting the proverbial rotten vegetables thrown at it but still came out the other side with its shiny exterior intact. As a teenager I was transfixed by the promo with its Sin City style characters and wonderfully romantic ending. Yep, you know the story of the 3 Norwegian lads with the funny hair. This hasn’t aged one iota for those who were there way back then and is as bubbly as a bottle of cheap cider. It had to be released 3 times before it became a hit. It was the first piece of vinyl that I ever owned and it’s worth lots of money now. Right, pass me the ball. KD

[US] Hunting High and Low