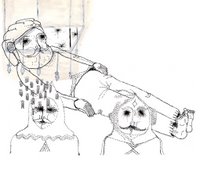 It’s been a while since post rock threw up a new burning light so it’s genuinely exciting when a song with no words produces a rush of excitement. Vancouver band Precious Fathers released their self-titled debut last year, have supported the Album Leaf and rather reassuringly at least 50% of their number sport beards. ‘Snowshoes’ isn’t particularly intricate; in fact its docile nature is half the attraction. Think Explosions In The Sky circa ‘Friday Night Lights’ with more expressive rambles that see the momentum pick up delightfully over several minutes. Swap a chorus for some circular jangling and you might have a number one hit but Precious Fathers prefer to charge their instruments with the feelings that pour from aorta central. The result is a mood piece that’ll have you catching raindrops in your mouth as a colourful rainbow forms about 3 fields away. KD