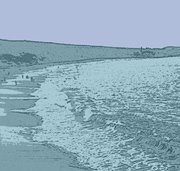 Did you know there are people playing Arcade Fire covers already? Yep the album has only turned 18 months and in far flung places such as darkest Sweden there are girls like Linda Anderson trying to recapture rebellion and lies. If the covers don’t work out then maybe Elfi (Linda in creative mode) can probably make a decent living from playing her own stuff, which never fails to light up the northern sky. Signed to the young yet prestigious Molokini Records Elfi has just released her first single which includes the nifty ‘All By Myself’. Twee as you like and as spirited as a bottle of rogue poteen this has cult hit written all over it. Imagine Bjork cast out into the woods with only her rhymes for company and you’ve got this in a nutshell. KD

Elfi – All By Myself