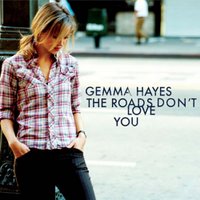 A serious case of writers block meant there was a 3-year gap between Gemma Hayes albums. Her debut ‘Night On My Side’ received a Mercury Music Prize nomination in 2002 but the wait for the follow up culled some of the artist’s momentum. Despite making all the right noises the jury still seems to be out on the extent of her talent. You’d have to wonder whether there is really that much of interest lurking underneath the undoubted production sheen. Many of the songs on her sophomore effort are of such a similar ilk that by the end the glee is eroded. That said, from time to time the Tipperary girl hits the nail on the head. Like on ‘Two Step’ that recalls early career Alanis Morissette. Bolshie and strong willed with a beautifully delivered chorus ‘Two Step’ is a triumph. The song plays effortlessly and perhaps signposts where Hayes could yet prosper. KD

[US] The Roads Don’t Love You