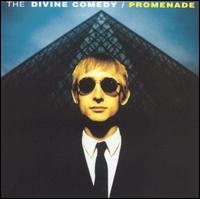 That Beirut post had me thinking about the Divine Comedy and how they used to rattle my cage before Hannon lost the run of himself and sold his posh arse to commercialism (or putting it another way, he set off in a direction that did nothing for me). For a time in the late nineties he was quite the celebrity, at least in Ireland and the UK. If you rewind back a little to his early days you’ll hear a young man with fresh ideas who could easily sit on a bill that included My Bloody Valentine. Not that he ever flooded the speakers with unspeakably beautiful feedback (although ‘Lucy’ had a decent twang) but his daring approach not only went against the grain but supported melodies aplenty. ‘Tonight We Fly’ might have forecast some of this future hits (‘Something For The Weekend’) but nothing in his later career could match the hopeless optimism of this cherishable beauty. Galloping with a pool of instruments in tow it could send a shudder down the spine of even the most inactive of continental plates. Gather together a group of your oldest friends, hold hands and dance a grown up ring-a-rosy. KD

The Divine Comedy – Tonight We Fly

[US] A Secret History