Dodgy – So Let Me Go Far 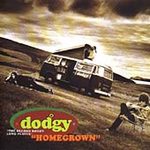 I met Ian Brown once, back in the mid nineties at a festival called Feile. The Stone Roses were just about coping without Reni and the gig is recognised as one of their best without him. Anyway, despite packing at least 3 Roses t-shirts (Lemon, Dolphin, Elephant) for the weekend I chanced upon King Monkey resplendent in my Dodgy t-shirt. I treasure the photo of the 2 of us together but when I show it to people their only comment is about the offending garment. Anyway Dodgy weren’t all bad, in fact they were quite good for at least their first 2 albums anyroad. ‘Staying Out For The Summer’ has shown admirable longevity on radio playlists but hidden away in their back catalogue are a number of better songs. ‘So Let Me Go Far’ is one of them from its slightly trippy opening to Nigel Clark’s big plume of a chorus. Dodgy was a club of 3 and the close knit association actually yielded a Dodgy night in deepest London for several years. They sold quite a few t-shirts too. KD

Dodgy – So Let Me Go Far