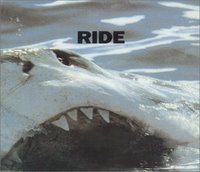 Despite leaving us with 2 terrific albums (and a couple of reasonable ones) Ride have been lost to the ravages of time. The song writing team of Mark Gardener and Andy Bell was among the coolest and most prolific at the beginning of the nineties. Buried beneath a mass of hazy feedback and drenched in all encompassing chords were the gentlest of melodies. Together with Slowdive, Chapterhouse and early Boo Radleys they defined all that was good about Shoegaze. The relationship between Gardener and Bell eventually soured and neither has eclipsed the beauty that came out of their Ride days (Animalhouse”¦eeek, Oasis”¦burp). So if you are beginning your journey of discovery of this quartet from Oxford look no further than ‘Unfamiliar’ from the ‘Today’ EP. You see Ride were also adept at writing impressive b-sides and littered throughout their career was at least an albums worth of classic material that could only be found on their singles. Once you’ve absorbed ‘Unfamiliar’ head straight for their debut ‘Nowhere’ and the early EP’s ‘Play’ and ‘Fall’. Then bask in the glory of second generation Ride with ‘Going Blank Again’. What a true carnival of sound awaits your ears. KD