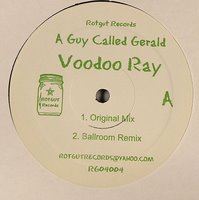 The start of the dance revolution, stripped bare but with more ideas than you could shake a glow stick at. A Guy Called Gerald is rightly revered for giving dance’s infancy a credible face. Manchester born Gerald Simpson was the principle who not only imagined ‘Voodoo Ray’ but also wrote 808 State’s ‘Pacific State’. ‘Voodoo Ray’ is a laconic stroll through measured beats and a female vocal that rivalled anything the Orb were able to come up. It sounds so totally of its time yet so eerily relevant almost 2 decades on. Imagine the scene in the Hacienda as the synths spilt from the speakers like an anaconda, in the process creating a seething mass of twisting bodies. KD