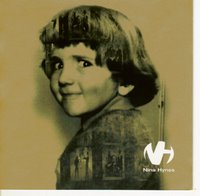 Imagine Gemma Hayes with a hint of urgency, less preoccupied with production values and wigging it until her whole body creaks and you get an insight into Nina Hynes’ ‘Mono Prix’. Yeah, it’s pretty special, not least because it is a loose canon with enough ammunition to shoot down all your prejudices against broody young female singers. Having a backing band called the Husbands probably adds some balance I guess and if only Ms Hynes could be a bit more prolific she could certainly break new territories. As it is, she remains one of Dublin’s best kept secrets, a Celtic Tigress take on Rilo Kiley. Shimmering guitar lines, bouncy sundayesque vocals and an eye for off-kilter arrangements always win the day round these parts. She’s even supplied backing vocals to the much underrated Michael Knight at the appropriately named Sugar Club recently. Personality is an important commodity and Hynes music displays one that is vivacious. Signed to Reverb records this is magic stuff, so much so that she decided to write a song about it (which includes an ace Troggs entrance and wonderful Wonka moment at the end). KD