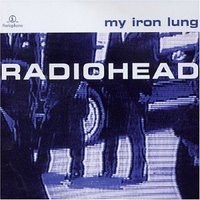 For those with indigestion after a gruelling afternoon with ‘The Eraser’ then ‘Permanent Daylight’ could be acidic neutralising agent you require. The song appeared on the ‘My Iron Lung’ EP that boasted a set of universally strong tunes. The majority of the songs (acoustic ‘Creep’ excepted) were recorded at the same time of ‘The Bends’ sessions but either didn’t fit the album or were regarded as b-side material. The strength of the EP is the way these cast-offs gel so well and taken as a whole the record is among Radiohead’s best work. ‘Permanent Daylight’ is particularly fulfilling as it boasts enterprising guitar play and percussion that kicks in and out at just the correct time. Thom Yorke’s vocals are underdeveloped but this merely highlights the majesty of the music that swells and contracts so evenly it’ll have you pining for a time when the Oxford quintet played it instinctively. KD

More Info (or is it?): Radiohead
Buy Album: [UK] My Iron Lung

[US] My Iron Lung EP