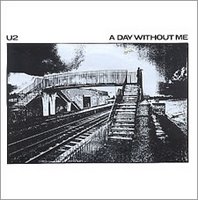 You know it wouldn’t be allowed to occur in 2006. A U2 track without any intervention from Bono whatsoever, surely not. But it happened back in 1980 even if it was spirited away as a b-side on the ‘A Day Without Me’ 7-inch. And what an enjoyable little Dave Evans piece it is too, the reverb is laid on heavy as the Edge lets his intricate fingers paint the imagery. Larry Mullen is rather perfunctory in his performance but Adam Clayton is his admirable self, happy not to be centre stage but essential in giving the track its soul. This was the embryonic early days, the message was being formulated and the essence of the band was still the tune. Their incandescent debut album ‘Boy’ was on the way and ‘Things To Make A Do’ proved to a nice precursor to the splendour of the near instrumental ‘An Cat Dubh’. KD