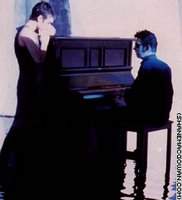 Of course she’s as mad as a brush but that doesn’t stop Sinead O’Connor having one of the most moving voices to ever pass through the pop sphere. Her association with movie soundtracks began in 1987 when her collaboration with the Edge (U2) produced ‘Heroine’. Back then a balding female singer from Dublin was something to behold but it was her crystallised voice that truly enchanted. Since then her material has appeared in numerous cinematic moments including ‘A Nightmare On Elm Street 4’, ‘The Butcher Boy’, ‘Vanilla Sky’ and ‘The Talented Mr. Ripley’. ‘Haunted’ is taken from the 1997’s ‘The Matchmaker’ and included the not so cute charms of Shane MacGowan. The contrast between beauty and the beast works remarkably well with deep seethed melodies present throughout. The soft-lit instrumentation exemplifies the varying vocal styles and one is left with a warm feeling in the tummy by the finish. KD

More Info: Sinead O’Connor & Shane MacGowan
Buy Album: [UK] I Do Not Want What I Haven’t Got

[US] I Do Not Want What I Haven’t Got